Christmas is coming. The goose is getting fat… 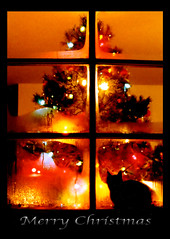 Hard to believe that Christmas is almost here. Only 6 more days.  I think most of the pre-Christmas errands are done. Only one or two quick trips to make to tie up a few loose ends. This year The Wife and I bought each other a dining room table for Christmas. I like it a lot, but I don’t think it will play any XBox 360 games or double as a HDTV. But we’ll see.

We haven’t really gotten Rowan anything. He’ll only be 9 months at Christmas. He’s a baby; what does he care? Some people think that’s a horrible way to think. But we never really got any of the kids anything for their first Christmas. Actually Addison was only 6 months old and Ella was barely a month old. And of course the grandparents took up any slack. But before your first birthday you are much more interested in the wrapping paper than what is actually inside the box.

But along those same lines, I think it’s much easier to buy a gift for a 7 year old than a 4 year old. Personality and preferences have developed much more by then, so my seven year old can tell me more of what she wants. I’ll ask my four year old and she’ll offer up one or two suggestions, and then start telling what she wants for other people to have. In some ways I see that frustrating grandparents because they want to “get her something” that she’ll like. But I think it is sort of refreshing that she doesn’t have this huge list of things that she wants. She’s just happy to play with what she’s got. In fact, whatever her big sister wants is what she wants. Because she really would like to be like her big sister. And Christmas shouldn’t be about what we get anyhow, right?

Christmas this year will be different. We live a lot closer to all the family. So instead of driving 3+ hours from Clinton to make a North Mississippi Tour, we’re only 35 min away at the closest and 75 at the furthest. So that means I’ll be able to sleep in my own bed each night. But even when we drove longer distances I always made it a point to have my family in our beds on Christmas Eve. Some disagreed with me, but I felt it was important.

A tradition we’ve had the past few years might get tested. In years past since we were in Clinton on Christmas Eve because of attending church services, we’d always get some Pizza Hut carryout for our Christmas Eve supper. Not sure what will happen this time though. Might be back to LASAGNA at my grandmothers.

But a new year. A new routine. But hopefully not a loss of what Christmas is all about.