So to continue on with my Favorite Places series, we land in Colorado. And I’m not sure if it’s more about Copper Mountain, or the actual snow skiing. The first time I’d ever gone snow skiing was when I took the job as youth minister at a church in Amory, MS. A trip was started, but I inherited the planning process midstream. So not really knowing what I was doing, I took a group of adults, college students, and students to Winter Park, CO. I was clueless, but had important people (doctors and lawyers) waiting on me to tell them what to do. 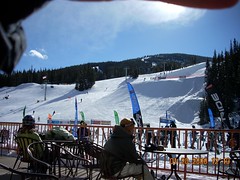 But the trip was good, fun, and built experience. The next time I took a ski trip though, we took the group to Copper Mountain, CO…and I simply fell in love. Now, there’s no real way to explain what snow skiing feels like til you do it. [Before I’d ever put on snow skis I had a guy tell me it was better than “you-know-what”. And he was a divorced guy. So he’d know. I’m not ready to make that claim though.] But it’s a feeling of freedom, a rush of thrill and excitement, and then your brain finally clicks with your legs to actually make getting down that mountain a manageable process, and then a productive process….it’s all over. You’re in love with skiing. 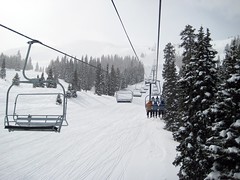 So since my first trip to Copper Mountain I’ve actually been back three or four other times. The mountain is brilliantly laid out with a rising degree of difficulty from right to left. And to stay in East Village was always our practice. Nice area, not crowded, and the Super B lift is right there to zip you to the top of the blacks and blues. To ride the lift up and look back over your shoulder and see the snowy mountains sparkling in the sunlight…it was the first moment in my life that I was truly struck by God’s beauty. It really took my breath. 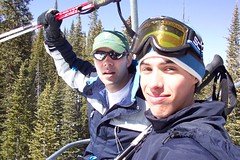 But the feeling of the bulky clothes, the horrible boots that are impossible to walk in, the sound of the snow crunching under your boots as you trek to the lift, inevitable wind/snow burn, the burn in your quads as you try to rip down the mountain at the edge of your physical abilities, the gnawing hunger at lunch battling the knowledge that you can spend more money in a ski resort cafeteria than some nice restaurants back home, learning how to manage a folded up trail map with gloves on, the runny nose that sometimes produces frozen snot if the weather is right, the laughter as you watch your friend take a fall that should have broken at least two bones but didn’t, listen to your friend laugh at you 15 minutes later for the same reason, staying on the mountain for as long as possible, hoping to catch the final lift ride to the very top, the last run of the day, taking those horrid boots off and your feet almost audibly crying with joy, the hot shower, the food that tastes better than usual, the funny sun burnt faces of all your friends as you sit around in pajama pants and gym shorts (and shirts too, of course), the card games (kemps, spoons, Australian rat screw, slap jack, and other “physical” card games), the bloody noses, ….and that’s just the half of it! 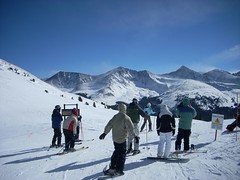 I would go skiing 17 times a year if I could. I like the beach. I really do. But I love the mountains too. And being able to share it with people you truly enjoy being around makes it all the better. You make memories, and can relive them too. I’ve been at the most random of places, and sometimes get a memory so vivid about Copper Mountain that my body almost sighs in regret that I’m not really there.

[If you’re ever looking to take a group trip snow skiing, I highly encourage you to contact Don Holmes at High Point Travel. I’d have been lost with out him every single year we went. Plus he’s an outstanding guy

My So Called Life