Over the last two years I got to know Steven Bush though his blog and photography. I would email him and ask a ton of questions, and he was more than gracious to reply and give me patient answers.  He was living in Nashville while also part of a band called Spur58. Since that time he and his wife, along w/ their bandmates, have moved to Austin, TX to be a part of a church called The Austin Stone. But I’ve continued to check his blog as he’s gone though an adoption process and expanded his photography business. 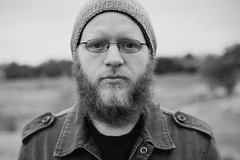 The lead singer of the band and now worship pastor at Austin Stone is a guy by the name of Aaron Ivey. I first heard of him through Bush’s blog because of pictures Bush took of Aaron’s family. As I looked as his and his wife Jamie‘s blogs I saw they too had a heart for adoption and missions. And as a country they have a heart for Haiti specifically. 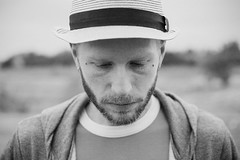 So, when I take time to peruse a blog here and there, I’d looked at these guys’ blogs, showed a few pics or stories or videos to my wife or shared them with friends.

But then yesterday Bev shows me the DM and asked if I knew anything about this: there was an add saying that Aaron Ivey was playing a concert that night. In Oxford. At….(get this)…Chick-fil-A. What? How did I miss that? And why did they plan it or the same night I had Community Group?

So the concert starts at 6pm. Group starts at 6:30. But it was a casual night of just soup and hanging out with another group. So I’d miss a little at the front of group and get to see the concert and meet the guys. I sent Steven and Aaron a msg on twitter and said I’d be looking for them.

I make it to Chick-fil-A thinking I’m going to be late, they’ll be starting up and not able to talk, and then I’ll have to leave and basically miss out. But they were behind schedule because of some weather issues. I was able to talk to Bush just a bit before sound check. I saw Aaron setting sound under the tent. Something he doesn’t usually do. He was stressing. I said hey, but could tell his mind was in about 47 other places and had no time for any talk, small or big.

I stuck around for a few songs, but had to get to the Heckel’s house for some good soup with some good people. We talked Friday Night Lights, and football, and website hosting, and mission trips. We talked of Haiti a bit because of the video from Austin Stone I sent out to our group. We talked of maybe trying to plan a trip soon that was similar.

I felt torn. I was enjoying the conversations with everyone, but wanted to catch the guys after the show, so close to 8pm I headed back up to Chick-fil-A. The stage area was being torn down, equipment packed up, and the band was being treated to free chicken and a tour of the inner sanctum that is the Chick-fil-A kitchen.

I got to sit down and talk with them as they enjoyed their free chicken (a friend of mine calls Chick-fil-A the Gospel Bird!). But this post is getting long enough. I’ll continue w/ the rest tomorrow.