To follow up on yesterday’s post, as we went to bed on November 16th, there was lots of prayer and concern. There was actually a brief point where I was almost deathly fearful. I was just outside of town, The Wife was at the Doctor, and as I was closing a business deal, the cell rang. Didn’t recognize the number and I was about to walk out of the door. So I didn’t answer. 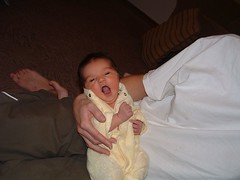 I leave, The Wife calls and chews me out for not answering the phone (which I should have). Turns out she’s at the doctor and I can tell there’s not been good news. But she won’t tell me anything over the phone. Nothing. So I go home and wait. And wait and wait. Then I call the Dr. office, and get a hold of her in the exam room, but still won’t say anything. But I can tell she’s upset. So I have to wait still.

FINALLY she comes home. But just sits in the car, with it locked, and is crying. Now just imagine all that is flooding my mind. We’ve gotten no so good news from the doctor that the baby might not be growing as quickly as is normal. The doctor is concerned. He wants to go in and induce right now. Then The Wife comes home and is obviously upset and won’t open the Explorer door. And she’s crying.

I’d thought we’d lost the baby. That there was a dead baby in my wife right now. It was crippling. BUT…that wasn’t the case. Very thankfully. Today my daughter is TWO YEARS OLD! But here is a blog entry from 2 years ago w/ a “in the moment” story of how it all happened…

Right now all seems well. We’re at home. The Kid is in the bed reading some books (reading is a funny term for her right now, but that’s what she calls it) and The Wife and The Other Kid (I need to work on some new names for the children) are asleep on the couch together. I’m on the computer while listening to Miss State play Syracuse. We’re up 4 right now.

But I’d said earlier that the doctor had wanted to induce Tuesday night. Based on a sonogram performed on Tuesday the baby (by estimations) had only grown roughly 3 oz. That wasn’t good. But it checked out great on the bio-physical test. But The Wife and I wrestled with it lot. He, the doc, said he’d wait til Wednesday morning at the latest. We try some “natural induction” methods Friday night. Then I prayed a lot. And I know we had a lot of other people praying for us too. The Wife seems to get a few contractions passing through her body, but they appeared minor. She goes to sleep and I can’t sleep so I get up. I come back to bed and sleep til the morning. I thought The Wife got up and down a lot, but the next morning (Wednesday) she tells me that she went for a walk between 3am and 4am. The cleaned the house after a nap.So morning came and I was disappointed. I thought that things were still like they’d been. I figure we’ll go and have to induce around lunch time. I was thinking it would still go quickly though once The Wife’s water was broken. So I go to the office for a while and then go get a haircut. Then come back home.

I get a few things in order that I’ll want to take w/ me. The Wife is feeling some pretty tense contractions by this point. But still not on any regular rhythm. But they’re now becoming intense. So I say let’s go. We’ll drop The Kid off at the Grandmother’s and then head to the hospital. But she tells me to go and then come back and pick her up. I leave her standing next to the bed with her head down on the bed w/ a slow moan. She’s thinking that we’re still a few hours off. That’s the way it was with The Kid.

I come back home, grab some pillows and try to get her in the Explorer. She can’t at first and then she can. So she hops in and leans way back in the seat. We’re about 3/4 of a mile from the hospital. Piece of cake. We hit a red-light soon. No cars coming. The Wife tells me to run it. I tell her it will change in a few seconds. She tells me to forget waiting and go. I can tell she means business. So I scoot on through. Then her water breaks. I call my dad and then my grandmother on the way while that happens. This was at 12:46.

I pull up to the door where you go in to the Labor and Delivery part of the hospital. I run around and open The Wife’s door. I ask her if she can make it in. But she’d just been telling me that it’s so close to coming. All she could say is that she feels she needs to push. I run in and tell them at the desk that they’re expecting us and my wife is in labor in the car just outside. She’s wanting to push and thinks the baby is really, really close.

They probably thought, “Yeah, sure.” because they see frantic husbands all the time. I wasn’t frantic, but determined. Anyhow, they come out there w/ a wheelchair. The Wife has pulled her pants down to her thighs. The nurse walks up and says, “Hey, honey….how are we doing?” then I hear her voice change and she says, “Uh-oh, I see the head’s out already!”

I’m trying to process all of this in my head. If the head’s out how will she be able to sit in the wheel chair to get inside. I walk up close and peek over the nurse’s shoulder to see what things are looking like down there. Then I see head…shoulders….arms waving…then the whole thing slide out. I was able to get a good peek and see that IT’S A GIRL! Most people had guessed it was going to be a boy. But they’d already clipped the cord and all that stuff that I thought I’d get to do. This is at 12:50. Four minutes earlier I was telling people on the phone that we were on our way to the hospital.

But they whisk the baby away inside and I see the, um, mess that’s in the seat with The Wife. But the nurses help her out and into the wheel chair and get her in. They bring the baby back after wiping it down. The Wife nurses and delivers the placenta and they stitch her up. Then we’re home free.

Last night was peaceful. The Baby slept fine. I didn’t. But I was trying to sleep on what amounts to a long ottoman. But I think it was more from my mind being crammed with tons of stuff. But they let us go home around 2:30 or 3:00. Everything�s been fine since we’ve been here. Everyone seems sleepy. I should be. But I’ll get my rest.

It’s crazy the timing of it all. If we’d been just a little earlier, it could have been messy in the parking lot of the wheel chair. Later and I would have had to pull over and do it myself or something. People asked me if I was freaking out during it all, and I said no. I didn’t have time to freak out. But I would have been out of my mind if I had to do it myself. I mean, I would have had no boiled water (that’s what they always did on Little House on the Prairie when someone was having a baby…boil water).

Thanks to everyone for the prayers. They were needed and appreciated. Don’t let up. Pictures to come soon. Oh, and Miss State is losing now by 9. 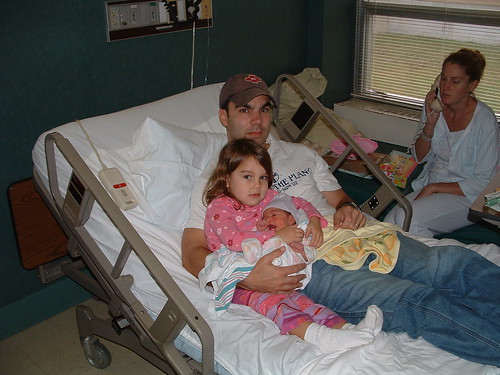